I am sure you have heard about the vegetarian diet.

The vegetarian lifestyle is very popular in the world nowadays. People embrace this lifestyle for various reasons. The two most popular reasons being, (1) health and (2) opposition to the slaughter of animals.

Even though the lifestyle is becoming more popular these days, vegetarians have been around for a very long time.

But when did vegetarianism start?

Do you have any idea?

Some think it was with Pythagoras

When the question is asked about when vegetarianism started, the name Pythagoras pops up.

Yes, that same Pythagoras you met in Maths class who taught you how to find the unknown side of a right-angled triangle.

You know what?…… That’s enough maths. We are talking about vegetarianism here.

I know some of you are breaking out into cold sweat just remembering those maths classes.

More than a Mathematician

Well this same Greek mathematician was a prominent vegetarian from way back when. As a matter of fact, vegetarians were called Pythagoreans.

And you thought Pythagoras was only famous for mathematics.

Well it seems he was a very independent thinker and he definitely did not support cruelty to animals. His abstinence from meat was based in part on his thinking that all animals should be treated as kindred.

Pythagoreans did not take kindly to the slaughtering of animals in the name of sports that was common in those days even though sometimes they had to hide their belief for fear of persecution.

It Actually Started Way Before That

Even though Pythagoras and his followers were very prominent vegetarians, they weren’t the inventors of this diet.

Way before Pythagoras and all those ancient Greeks, Indians, Asians and other practitioners of this lifestyle……… 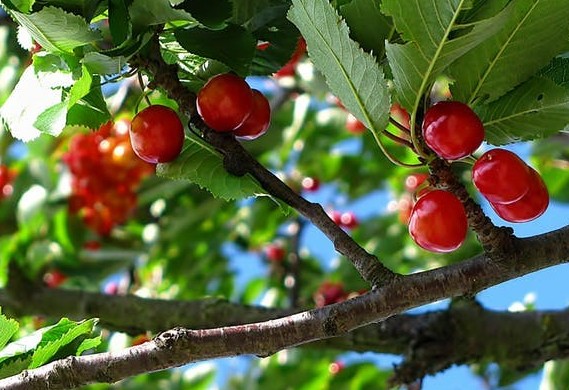 In this garden were two people, a man and a woman.

Can you guess their names? You got it, didn’t you?

Yes. The first human beings……Adam and Eve. They got their dietary instructions directly from God.

He told them, “I give you every seed-bearing plant on the face of the whole earth and every tree that has fruit with seed in it. They will be yours for food”. You can find this in the great history book in Genesis 1:29.

After they sinned and were dismissed from the garden, God told them they would now have to struggle and work the ground to grow their own food. He also told Adam to add the herb of the field (vegetables) to the original diet. You can find this in Genesis 3:18.

So you see, vegetarianism started long, long ago from the creation. It was God’s original diet for man……fruits, grains, nuts, vegetables. And he would certainly know what is the best diet for the creatures he created, wouldn’t he?

Health Benefits Were Observed Years Ago

But did you know that the health benefits of a vegetarian diet was documented years ago?

Let me relate a story to you.

Many years ago, approximately 604 B.C., some young men were taken captive from their home in Jerusalem (Israel) and taken to Babylon (modern day Iraq).

The King of Babylon selected some of these youths for education in the king’s court in Babylon.

Those selecteted had to meet certain specifications. They were to have no physical blemish and should look good in appearance. They were also the most intelligent of the lot.

To ensure that they kept up this appearance the king commanded that they be fed daily from his table with bountiful supplies of meat and wine. This was to sustain and nourish them so that they could be properly trained to take part in the king’s service.

Of these young captives there were four who would not eat of the king’s food because they grew up as vegetarians. They told the king’s servant who was in charge of them, “We cannot eat the king’s meat. Please Sir, just give us some peas, beans and lentils and give us water to drink.

The king’s servant was afraid and told them, “you are going to get skinny and sick if you don’t eat the king’s rich food and I am going to get in trouble”. But the boys pleaded with him and said, “Please, just try us for 10 days”.

The servant was not convinced but he decided to try them for ten days. After the ten days he compared them with those who ate the king’s food.

The results were amazing. The four boys looked so much better.

Their skin was clear and they had filled out nicely and looked a picture of health…………much better than the other boys.

Can you imagine that? Documented evidence of the health benefits of being a vegetarian from so many years ago.

You can find this story in the Great History Book in Daniel chapter 1.

There is a popular quote which is ascribed to Hippocrates, that famous Greek physician born in 460 B.C. which says;

“Let Food Be Your Medicine and Let Medicine Be Your Food”.

The vegetarian diet is well known to have significant health value. Many illnesses are treated or cured just by adopting a vegetarian diet. If you suffer from diseases such as diabetes and hypertension, your food can very well be your medicine.

Doctors and other health practitioners advise us to adopt a plant based diet for optimal health.

But you know, it reminds me of another quote that affirms my belief that a plant based diet and lifestyle is recommended for a healthy life.

Here is the quote:

On each side of the river grew Trees of Life, bearing twelve crops of fruit, with a fresh crop each month; the leaves were used for medicine to heal the nations. (Rev. 22:2)

Do you see it?…………..plants providing food and medicine.

This is a very, very old quote. You can find it in the book of Revelations (chapter 22 verse 2).

So When Did Vegetarianism Start?

Over the centuries there are many famous people who have been known to practice vegetarianism. History books tell us of various cultures and religions who adhere to this lifestyle for various reasons and some are even attributed the honour of being among the first to practice this diet and lifestyle.

However, the great history book, The Bible, takes us way back to the beginning of creation and shows us that vegetarianism started right there in the Garden of Eden when the Creator Himself (God), instructed His creation (man) of the diet which was best for him (plant based diet).

A lot of research has been done in recent times showing all the benefits of a vegetarian lifestyle……………but we are just catching up, aren’t we? The Creator gave the dietary instruction centuries ago.

If the makers of your Nissan Frontier Pickup truck told you to use diesel fuel, would you go to the gas station and fill up with gasoline?

If the Creator of Man tells us what our ideal diet is, what should we eat?

What do you think?